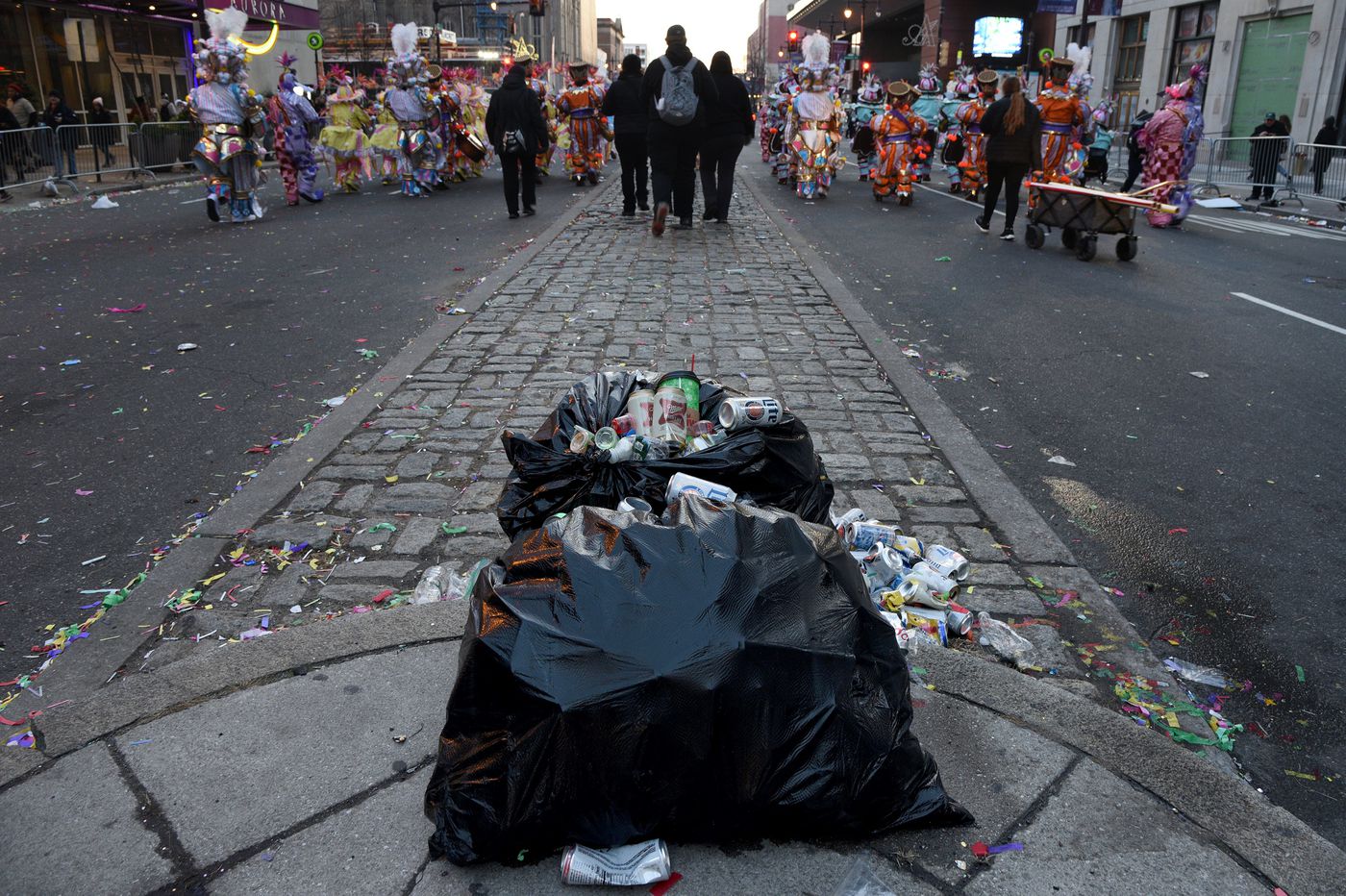 The Philadelphia Inquirer – Philadelphia spends $48 million a year to deal with trash-strewn streets and neighborhoods — eight times more than the next-highest Pennsylvania city, Pittsburgh, which spends $6 million, according to a new statewide study.

Nearly 90% of Philadelphia’s total costs go toward cleanup, with the rest toward prevention and outreach.

Philadelphia officials note that Pittsburgh and the seven other municipalities surveyed for the litter study are much smaller — both in population and land size. But Philadelphia, at $30 per person, spends more even proportionately to Pittsburgh, at $20.

Nic Esposito, director of the city’s Zero Waste and Litter Cabinet, pointed out that other Pennsylvania cities in the study spend more per capita on litter, so in that sense, Philly is actually closer to the middle. For example, Allentown spends almost $38.

In all, the nine cities spent $68 million on litter, amounting to about $28 per resident.

Esposito said the city, sixth largest in the nation, draws far more tourists, and has far more businesses and restaurants than the other municipalities examined. All those factors mean more trash.

Esposito, who lives in Kensington, said he does not believe Philadelphia residents litter more than people elsewhere. Rather, he repeated a phrase he’s heard often: “The dirtiest day in my neighborhood is the day after trash day.” In other words, he said the city’s blue recycling buckets, first issued to residents years ago, weren’t made for the explosive increase in plastic, and don’t have lids, so their contents often spill onto streets.

Last year, he said, the city had for the first time in its history more renters than homeowners. Landlords, he said, often fail to provide apartments and multifamily units with enough garbage receptacles.

As a result, many renters simply put trash curbside in plastic bags, which often tear and spill contents.

Esposito said the study, for the first time, provided the city with its true cost of dealing with litter, and that’s a good start. Included in the $48 million figure is $8 million that SEPTA spends to clean stations, rights-of-way, tunnels, and areas along the bus loop.

The data came from two studies released Wednesday by Keep Pennsylvania Beautiful and the state’s Departments of Environmental Protection and Transportation. That second study focused on litter and Pennsylvania residents’ attitudes associated with it. Both reports were assembled by Burns & McDonnell, a national consulting firm.

The studies were conducted to show taxpayers the hidden cost of dealing with litter and illegal dumping. Those costs are often buried because they can span multiple municipal departments. The Inquirer reported on preliminary figures for the studies after a summit was held on the issue in November.

“While litter and illegal dumping are often discussed as social or environmental problems, rarely do we think about their economic impact,” said Shannon Reiter, president of Keep Pennsylvania Beautiful. “Understanding these costs is a critical first step in developing strategies to change littering behavior. We’re seeing that even extensive and expensive cleanup efforts can’t keep pace with the amount of litter that’s accumulating.”

Reiter said the only way to reduce the cost is to reduce littering by expanding solid waste and recycling infrastructure, and educating residents, particularly schoolchildren, who are just starting to form their trash-disposal habits. 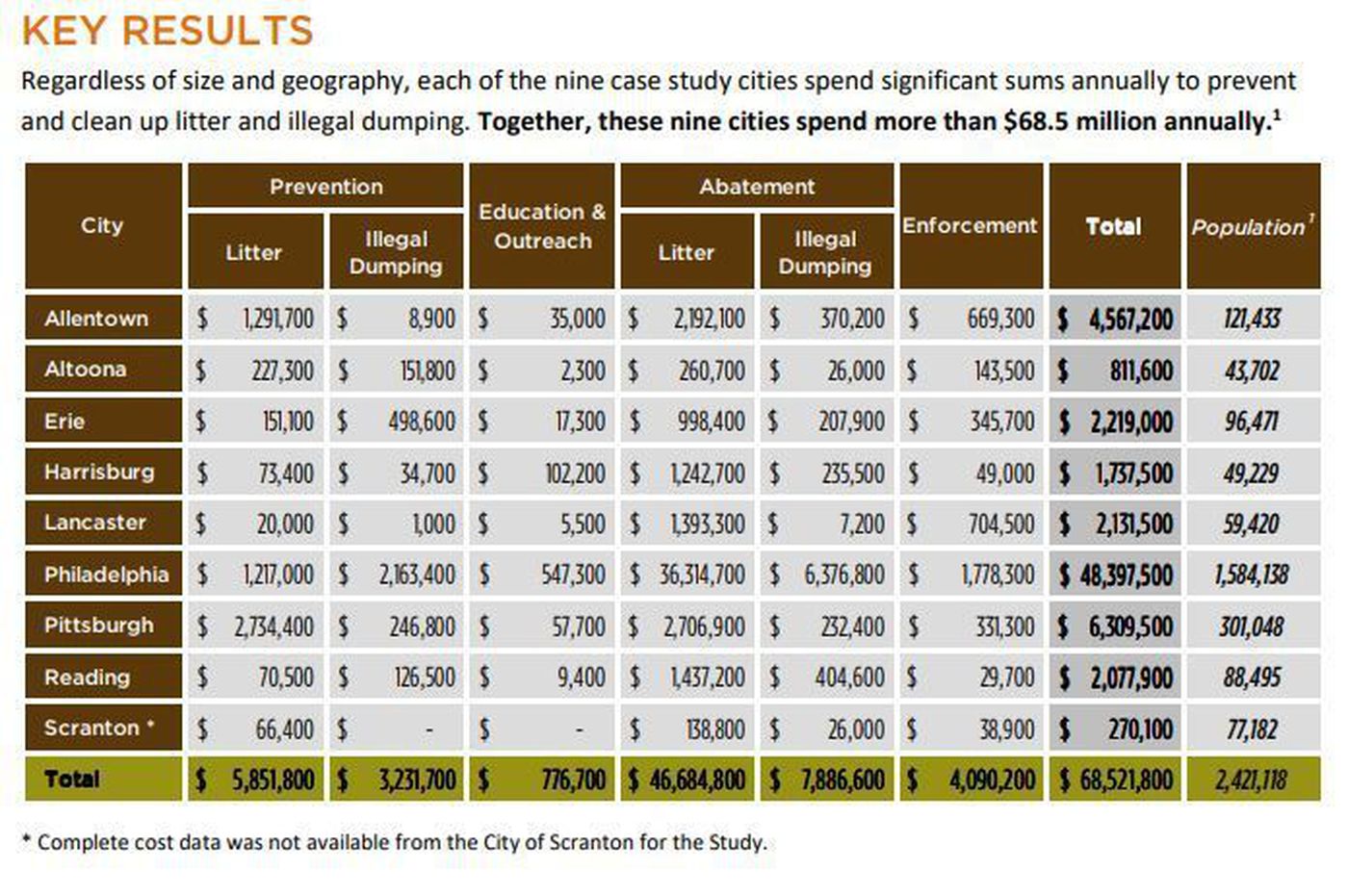 What measures has Philadelphia taken to tackle litter?

The second study estimated there are more than half a billion pieces of litter on Pennsylvania roadways. Cigarette butts and plastics make up the majority of litter, coming mostly from motorists and pedestrians. Freeways and expressways had the most litter items per mile. Local roads had the least.

Urban roads might have more litter per mile, but there are a larger number of rural roads, accounting for about the same amount of trash.

About 500 residents completed a survey compiled by Burns & McDonnell.

The survey suggests 90% of Pennsylvania residents believe litter to be a problem, and that it negatively affects communities. They see trash not only on streets, but also waterways, and are concerned about its effect on the environment and property taxes.

Residents believe litter is the result of people not caring, and a lack of convenient receptacles. Further, residents are frustrated that there are virtually no consequences for littering. About 80% of respondents said it was “not likely at all” for someone to get caught or fined.

About half of respondents said they encounter almost no public education or outreach addressing litter.