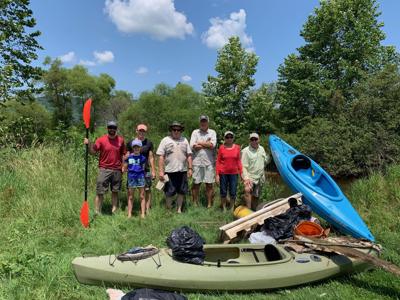 (Picture) Participants in the Upper Allegheny Watershed Association’s 2019 River Cleanup stand with some of the garbage collected and kayaks used to travel the waterways. This cleanup was done in partnership with the Potter County Conservation District near Roulette. UAWA covers the Allegheny River’s drainage in Potter and McKean Counties.

“We always see electronics, especially televisions, in addition to: tires, furniture, and household garbage during our illegal dump site cleanups. Along the roadways there are always food wrappers, bottles, cans, plastic, etc…we do see tires dumped along the road also,” said Heather McKean of McKean Environmental, when contacted about litter in McKean County. “Education and awareness of proper trash disposal and the impacts littering and illegal dumping can have on wildlife and our water resources is important. Additional recycling opportunities throughout the county are needed.”

McKean went on to explain there are regular events to help recycle items like tires and to address areas commonly used as dump sites.

“Our local Keep Pennsylvania Beautiful Affiliate, PA CleanWays of McKean County, holds a tire recycling event each July. Local residents pre-register and prepay for tire disposal at a reasonable cost and bring them to the collection to be recycled,” McKean said. “The Affiliate also organizes one or two illegal dump cleanups each year. We see repeated dumping at several locations in the County that have been cleaned up in the past, which is one of our biggest challenges.”

According to a release from the PA Department of Environmental Protection, the breakdown is as follows: Philadelphia spends more than $36 million; Pittsburgh and Allentown spend more than $2 million; Harrisburg, Lancaster, and Reading spend over $1 million; and Altoona, Erie, and Scranton spend hundreds of thousands of dollars each year.

Meanwhile, PennDOT spends upwards of $13 million per year on staff and resources to pick up litter along state-owned roadways.

DEP, PennDOT, and Keep Pennsylvania Beautiful will form a workgroup of state government agencies, local governments, and industry and community leaders to use the research results to develop and carry out a plan of actions to reduce littering in Pennsylvania. For that workgroup, efforts will focus around strategies to change behavior. The four top priorities include infrastructure, education both public and school-based, legal measures and incentives and efforts to enforce the laws already in place.